Leah’s Birth of Audrey: Releasing into the Intensity

As a doula and a yoga teacher, I am always emphasizing the importance of practicing a balance of strength and surrender.  It’s not something that many of us have a lot of experience with.  We often prioritize doing over being, especially in the competitive climate of life in San Francisco, where you’re competing for everything from parking spaces to restaurant reservations, from homes to jobs and everything else in between.

Leah being a very physically strong and active lady, I was curious to see how she would embody and embrace surrender.  She was a weight lifter and dancer, yet she also practiced HypnoBirthing and came to some of my Restorative Yoga workshops.  I distinctly remember the day or two before she gave birth, observing her in Queen’s Pose with her jaw slack and her body fully released into the bolsters, and thinking to myself, “She’s got this.  She is so soft. She is READY.” Indeed she was.

Here’s her story in her own words:

“I had intermittent surges leading up to the birth for weeks before hand. This made me very skeptical about when labor was going to start, even at 5 days overdue. We had scheduled an induction for the weekend and I was due to go in for a non-stress test the next day. We had a big dinner of very spicy Indian food and I had a glass of cider and went to bed. I woke up at 1am with a crazy bad cramp (which I realised was a surge later) and then the baby stopped moving. I panicked and we got dressed and drove into St Lukes. I was pretty inconsolable at that point as that was the first time during the entire pregnancy that my usually very active little fetus had stopped moving. I was terrified of going in to the hospital cause I knew that would set us up for a birth I wasn’t wanting or prepared for. Just as we were about to pull in to the parking lot of the hospital I felt some movement and I told Chris to turn the car around. Which was a really good thing.

When we got home there were no more surges and she was moving around nicely so I was able to shut my eyes and go to sleep for a couple of hours. After I woke up, time gets a bit hazy. I was lying in bed and having some intermittent cramps. At a certain point they got a bit too intolerable so I woke Chris up and the only position that worked for me was leaning over the bed, clutching on for dear life, rolling my hips around (pole dancing training coming into effect) The surges started to come end-to-end and I started to worry. I had no idea this was something that could happen and once again it scared me. I was using my breathing as much as possible through this, trying to remain soft and relaxed and welcome the surge. But those double barrelled ones were really tough and very much taxed me, I tried to change position but it made everything more intense, and I was getting tired. At a certain point I asked Chris to get our doula, Britt to come over. Before this I was weirdly concerned about waking her up. The things you worry about when in labor. This was around 5am. 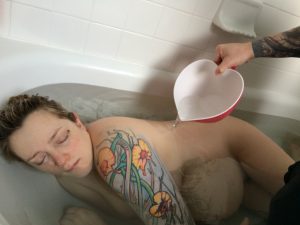 Britt arrived and her presence was immediately calming. She reassured me that the surges coming end to end were completely normal and that it would take a couple of surges to settle in to any new position. She ran a hot bath for me and I settled in on my side for active labor. The surges were so intense and I got through them by yelling “YES BABY” “NOW BABY” and then also mooing and groaning. My Mum was in the house and I know she was really worried for me. I can’t imagine what it’s like to see your baby go through so much and not be able to fix it for her. But I did take the opportunity between surges to rest and relax. My wonderful husband was constantly pouring warm water over me and that was the thing I focused my energy on. At that point, water filled up my ears and that was a complete blessing! I was able to go completely within. This was definitely the hardest part of the labor as there was nothing to do but go towards the sensations and endure.

At a certain point, I’m told, Chris and Britt saw my uterus start to bear down and contract. I noticed Britt leave the bathroom and she reappeared with clothes for me, we were heading into the hospital. I was on all fours in the back of her car and Chris was beside me. This was 9am and we were in traffic on the 280. I was fighting the urge to push and Britt instructed me to make horsey noises and I obliged. We were standing at the nurses station, signing in and I said I needed to get to a room. I stood next to the bed and my waters proceeded to break spectacularly. There was meconium in it. It ruined my shoes. I don’t know why I noticed this but I did.

We had trouble getting the monitors on me and I was really tired so I climbed onto the bed and proceeded to push. Pushing was awesome. I felt like I was no longer a passenger on the ride but the driver. My weightlifting training overrode my HypnoBirthing training at this point and I held my breath like I was going for a max effort squat every time I pushed. Being on the bed was a great rest for me but the pushes were wholly inefficient. I was pushing, but mostly I was resting. After 15 minutes of pushing on the bed, I knew it was time to put in some work and get the baby out. So I abruptly informed everyone that I was moving to the birth stool. 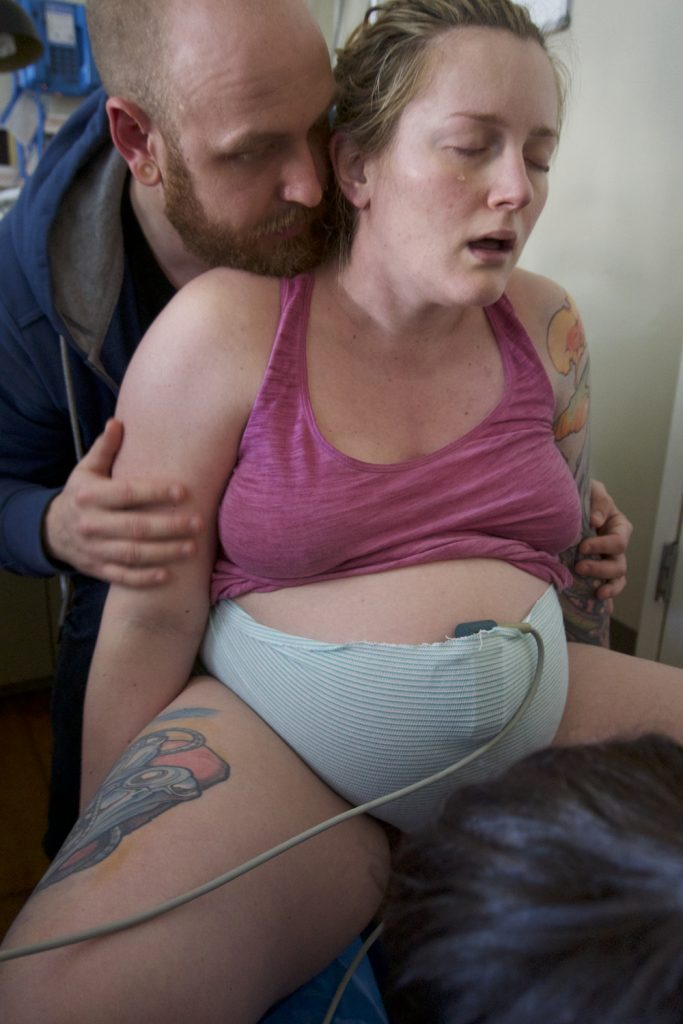 Chris sat behind me and I bore down with all my power. Three pushes later she had crowned, and the midwives were telling me to slow down. I really had no idea what I needed to do so I looked at the midwife in front of me and just said “tell me what to do”. I don’t remember what she said but I do know that I did what she said. I remember commenting on how much this part hurt. At this point, the midwife in front of me and Britt told Chris to come around to the front of the stool. This last push shot her out of me, taking me by surprise. Chris caught her and stopped her from hitting the floor. At that point she was in my arms and it was the most visceral, perfect thing. Like she’d always been there. Even now two weeks later I get a bit teary thinking about it. She weighed 8lb 11oz and had a head of fluffy hair, nobody in our family has had hair when they were born so I noticed this straight away. She also had long, long fingernails. A well cooked baby. Feeling her on my skin was like the best drug in the world. 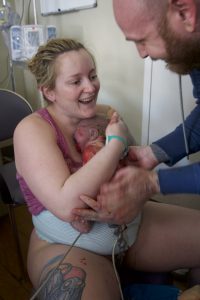 She was born at 9:53am on the 22nd March 2016.I had a 2nd degree tear so I was stitched up very carefully by the OB. After I was stitched and we had sat for our golden hour (didn’t feel like like an hour, it felt like 2 minutes), I passed out as I was heading off the bed. The nurses jumped into action and within a couple minutes I was IVed and fluided and started to get back to life. This scared my mother. Britt was amazing during this time, massaging my feet and putting some kind of amazing smelling stuff under my nose, and feeding me juice. Thank goodness for Britt. Also thank goodness for everyone at St Lukes. Those people are the most excellent people ever. 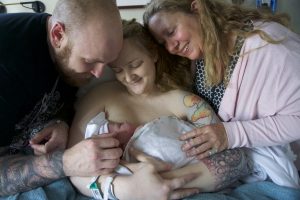 Overall, labor took about 6 ½ hours if you don’t count that first surge that made us head to the hospital. I pushed for about 40 minutes. My labor was the most amazing experience of my life. It was terrifying and joyful in abundantly equal measure. The best thing I ever did.”

Being Leah’s doula was such an honor for me.  To see her gracefully weave strength and surrender in the dance of labor brought me joy and brought her this smooth, healthy and efficient birth.

To learn more about using hypnosis based techniques to prepare for your own  birth, check out Rachel Yellin’s Childbirth Education classes.